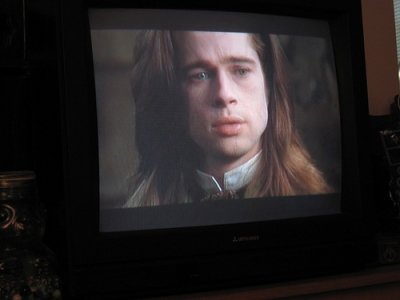 I’ve listed 5 reasons I liked Interview with a Vampire, since it was one of the very first vampire books I read. I liked it so much after I checked it out at the library that I ended up buying a hardback copy from a second-hand store. It has been well-read over the years.

5. An Excellent Cast of Actors

I thought the group of actors who played the vampires consisted of some great choices. Brad Pitt, Antonio Banderas, and Kirsten Dunst were perfect choices for people to portray the vampires from the novel. The original choice for Lestat was Julian Sands and I wish he had gotten to play the part. He would have been a perfect Lestat.

4. The Movie and the Book Were Fairly Close

Watching a movie version of a book is sort of a toss up for me. Sometimes I look forward to the movie and other times I don’t want to see it at all. I liked the way the movie and the book were very similar.

3. The Storyline Was Intriguing

The first person touch to the story made it much more interesting, in my opinion. All that the main character, Louis, went through was easy to following and made an enjoyable tale. I’ve read this book at least five times already and have yet to get bored with it.

2. It Wasn’t about Creepy Vampires

The vampires in this story were all portrayed as rather nice looking characters. The movie, of course, enabled people to put a face with the description. For the most part, the actors looked like the vampires I imagined when I read the book.

So many vampire stories are too far-fetched to be realistic. This one definitely felt more like a story was actually being told by a real vampire. I liked this touch to it. I thought it was better than the grotesque, shape-shifting creepy vampires so many stories from the past have been about.

If you’ve read this book already or even seen the movie, then you will probably have your own reasons for liking the storyline. What do you like most about this novel? Did you find it easy to read and inspiring to read more about Lestat?